Landmannalaugar – Fjallabak 4 x 4
A long day tour from our guesthouse. Only during summer. 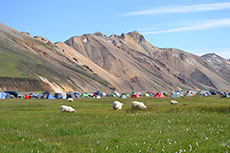 Fjallabak Nature Reserve was established in 1979. The Nature reserve is 47.000 hectares and is over 500 meters above see level. The land is mountainous, sculptured by volcanoes and geothermal activity, covered by lavas, sands, rivers and lakes. The Fjallabak region takes its name from the numerous wild and rugged mountains with deeply incised valleys, which are found there. The topography of the Torfajokull, central volcano found within the 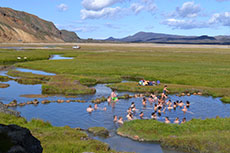 Fjallabak Nature Reserve, is a direct result of the region being the largest rhyolite area in Iceland and the largest geothermal area (after Grimsvotn in Vatnajokull). You begin by driving east to the rock ledge Gaukshofdi. There is a good view towards the active stratovolcano Mt. Hekla and also over the valley Þjorsardalur, which the year 1104 became deserted following one of Heklas eruptions. From there you drive to the waterfall Hjalp which is situated in the lava fields north of Mt. Hekla. The next destination is Thjodveldisber, a farm museum reconstructed according to the medieval farm Stong, which is located a little further up in the valley Thjorsardalur.

Now you can drive to the Interactive Energy Exhibition at Burfell Power Station. The exhibition provides a history of how these techniques have been used in Iceland over time and invites visitors to look into the future and at the possibility of harnessing power from Geothermal, Wind and Sea sources. From there, you drive up to the highland towards Ljotipollur (Ugly pool), a crater formed in a 15th century eruption. As you will be ready at this point for bathing in a hot natural pool or wanting to go hiking, which ever you feel like doing, you now drive to Landmannalaugar. Once you feel energized enough to move on, you drive to Eldgja, or “The Fire Fissure”, which is 40 km long and stretches

from the glacier Myrdalsjokull to the low mountain Gjatindur and beyond it further northeast. It is a unique natural phenomenon, which was created during a tremendous eruption around the year 900. In places it is 600 m wide and very deep. From there you drive to Vik in Myrdal and then the South Coast back to Lambastadir Guesthouse if you are going to stay there for another night. This is a long day tour where you can expect to see colorful and unusual landscapes. The road to Landmannalaugar and Fjallabak is only open during the summer months./p>